Why small and handmade is so good! by Sam Kurtz

Home/Uncategorized/Why small and handmade is so good! by Sam Kurtz
Previous Next

Why small and handmade is so good! by Sam Kurtz

Single vineyard, hand pruned, shoot thinned, handpicked…what does it all mean and why is it important?

We make all of our wines from our tiny 5 hectare vineyard which we manage very carefully. We do our vineyard and winery practices by hand where ever possible because we believe it ultimately produces the best and most interesting wine.  Here I have broken down a few of the things we do in the vineyard and why we do them.

Single Vineyard essentially means all the grapes for the wine come from one location / vineyard that is relatively small and homogenous. In theory, a gigantic corporate vineyard with row lengths measured in kilometres could claim to be a single vineyard but this would be misleading. The quality, ripeness and wine style of the grapes would vary across multiple soil types, and accordingly the wine wouldn’t necessarily be a true expression of the one location. Our vineyard is only 5 hectares; picture a triangle with sides of roughly 350m x 350m x 500m. The soils are pretty uniform, although even across that scale there are some small variations.

Not every vineyard should be considered for a single vineyard. Large companies attempt to blend to a house style for their wines, valuing consistency above personality and vintage variation. They typically blend their wines from a large number of vineyards, each with their own contribution; using them a bit like a spice cupboard. The first vineyard might have good colour whilst the second has good tannins, the third might have a good perfumed aroma, the forth might have a sweet palate etc. It’s far rarer to find a vineyard that makes a complete wine on its own. So you may well ask why we have the confidence to make our wine purely from our single vineyard. Firstly it was the location.  The vineyard is in the Ebenezer sub region of the Barossa which is famed for its red wines. The second reason was that it lies about a kilometre to the east of Penfold’s Kalimna vineyard which we knew was an amazing site (it contributes significantly to Grange as well as their rarer single vineyard wines). The third reason was we bought our vineyard from Elmore Schultz (one of the E’s on the E & E label) and at the time the grapes were going to Rockford, who we had a high respect for. This was all convincing, but the main reason we felt confident that we had a great site was the presence of Old Bush Vine Grenache. Old vines would not have survived the many seasons, or the 1980’s vine pull, if they did not deliver the goods. These 90 year old Grenache have been there so long that they even grow away from the predominant Spring wind direction.

We have had the vineyard since 1996 and made wine from it since. Those early Grenache wines which we made for our own drinking proved that the fruit was perfect for single vineyard.  The wines were well balanced with great depth and persistence, and had a personality which showed a great sense of place.  Each variety which we specifically chose to plant also knowing its suitability to the site has proven the same thing. Firstly a little question: why do we prune vines? A lot of people think it’s just to control the crop load. This is in part true but not the whole answer. Vines naturally controlled the crop themselves when they lived in their natural state growing on trees in forests. The main reason we prune is to actually get a frame work in order to get the fruit well-spaced and consistent. We have always hand pruned our vines. Our Bush Vine Grenache just can’t be machine pruned because every vine is so different, gnarled and twisted. We also believe it’s very important to hand prune our other trellised vines. Every vine is different to the next and as such should be treated as an individual. For example vines with less vigour can be pruned to fewer buds to improve their vigour. We can ensure the grapes will all ripen at an even rate because of the consistency we create by treating each vine as individuals. The frame work we create in a vine tightly controls the bunch spacing; allowing the bunch to get just the right amount of light and to be spaced apart from the other bunches. This means that we have both better quality fruit and far less potential for disease. We can therefore reduce the amount of sprays required. Too little light on the bunches results in herbal green fruit and poor colour.  Too much light can lead to sunburnt fruit with cooked, jammy characters.

You can see here a machined pruned vineyard. Essentially it has just been pruned by a tractor mounted saw. Versus our Hand pruned Cabernet As you can see, the machine pruned vines are inconsistent and overcrowded. Rojomoma Red Art Shiraz.  Note the open canopy and space around the bunches.

A machine pruned vineyard.  Note the crowding of the bunches. Shoot thinning involves removing any excess shoots from the vine. It is done once the vine begins to grow in spring. So why if we tightly control our pruning do we need to shoot thin? Well the answer is that the vines don’t always cooperate. Sometimes in spring they throw out additional shoots and multiple shoots from the one bud. These extra shoots are typically weaker and produce fruit that ripens more slowly and inconsistently, adding green herbal characters to the wine. We remove these extra shoots during spring so the vine doesn’t waste its energy on them; taking the vine back to the way it was pruned. This is especially important for certain varieties, such as Petit Verdot, which loves to throw extra shoots. It’s one of the reasons why the variety is somewhat rare. Great examples of Petit Verdot are uncommon, but we feel it’s worth all the additional work to make something special.

Rojomoma Red Art Petit Verdot before and after shoot thinning The modern machine harvesters have come a long way from the violent destructive machine harvesters of the 1970’s. These days they virtually shake the fruit off the vine, which in some cases can give pretty good results. For example, machine picked Cabernet in cold conditions can end up as a grape bin of almost perfectly intact whole berries. So why then do we hand pick? Firstly, not all varieties like machine picking as much as Cabernet and it’s not always cold at harvest time. For example hot Semillon, Grenache or Tempranillo can end up quite smashed up and oxidised. Secondly, you can’t machine pick bush vines or old vineyards without badly damaging them because they were not planted to accommodate machinery. Even younger vineyards can have the framework you’ve worked so hard to create permanently damaged by the harvester. Thirdly, machine harvesting picks everything in the vine canopy. Not just grapes but also caterpillars, spiders, pruning snips, pliers, even snakes and lizards. Hand picking also allows us to be selective. If there is a bunch that is green, diseased or bird pecked we can leave it behind. One other advantage of hand picking is it allows us to control how much of the fruit we leave as whole bunches, whole berries or crushed fruit.  This increases the complexity of the wine and also allows more control over the extraction of tannins in the wine.  I’ll talk more about this next time when I discuss what makes us different in the winery. 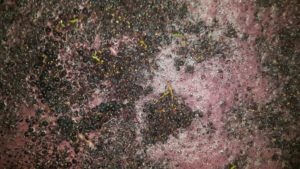 A ferment with some whole bunches in it 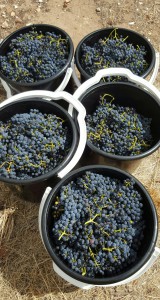 I’m off to hand pick some Shiraz now! I’ll catch you after vintage to talk wine on a small scale.  Cheers, Sam.

About the Author: Sam Kurtz